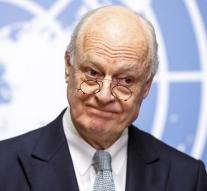 - Besieged areas of Syria for a month long remained inaccessible to aid convoys. That said, the special envoy of the UN for Syria, Staffan de Mistura, on Thursday.

De Mistura suspended a meeting of a humanitarian commission next week to send a signal to the United States and Russia. Those two countries are co-chairmen of a group of countries that later meets Thursday to discuss a cease-fire.

De Mistura said that in the northern city of Aleppo a truce of 48 hours is required. The US, Russia and other parties should exert pressure to do so by the warring parties, he said.