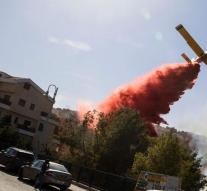 - Thousands of people have their homes in and around the Israeli port city of Haifa fled to the forest fires that ravage the area for days. Police have evacuated several neighborhoods.

At least 25 people were injured. Also have breathing problems many. According to a police spokesman, there are advanced plans to evacuate hospitals and the university.