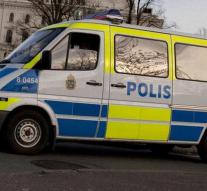 malmo - In a shooting in Malmo at least four people were seriously injured. Police have dropped off a large part of the city and opened a manhunt for the perpetrators.

That could- possibly from a scooter- opened fire on a group of people, which resulted in several injuries. There would be fired at least 20 shots.

Was in town for a football game many police on the leg. Still no suspect is still held.