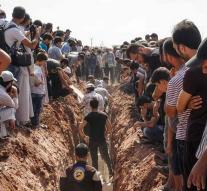 damascus - Seven members of the Syrian rescue organization White Helmets were shot by unknowns in the city of Sarmin in the northwest of the country on Saturday.

The emergency workers were killed when their office was attacked by armed men.

The White Helmets is a relief organization dedicated to the salvation of civilians in the Syrian civil war. She does this work especially with the involvement of volunteers. Last year, the organization received the Right Livelihood Award, also known as the Alternative Nobel Prize.