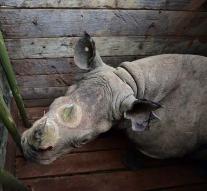 nairobi - Seven black rhinos died after moving to another game park in Kenya. Kenyan media reported that the seven last months have been transferred from a park near Lake Nakuru to the more than 300 km southeastern park Tsavo East. It concerns half of the total of fourteen animals that were moved.

The responsible minister was very pleased with the successful move, says The Daily Nation. The minister, Najib Balala, has not yet responded. He has been asked to explain why the rare animals have succumbed relatively long after their move.