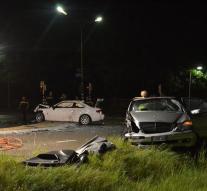 - In the night from Friday to Saturday, seven people were injured. The accident happened in Nijmegen. Two cars collided on Mayor Dale Hitting against each other. Possibly one of the vehicles drove through a red light. The police investigation into the circumstances of the accident. Around 2:15 pm, the victims were taken to hospital.

The firefighters had to rescue two people from the wreck of a Mercedes. This involved a man and a woman, writes De Gelderlander.

In the other car, a BMW, in total there were five people, four men and one woman. By coincidence passed a policeman first accident, then he called in the emergency. By accident the road was closed for some time.