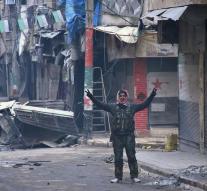 moscow - The Russian Defense Ministry on Thursday published a list of seven rebel groups agreed to the cease-fire in Syria. get together to Moscow estimate more than 50,000 rebels being silenced their weapons.

The list consists of relatively moderate groups. The jihadists of the Islamic State and Jabhat Fateh al-Sham (the former Nusra Front) do not count. Also Kurdish militias are not officially involved in the truce, which is established on the initiative of Turkey and Russia. Turkey considers the Kurdish fighters as terrorists and do not wish to do business with them.

Below is the list of rebel groups who participate according to Russia, ranked by the number of fighters that they have according to Moscow.