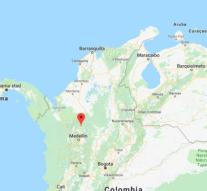 bogota - A shooting in a bar in the Colombian town of Yarumal in the province of Antioquia has killed seven people. According to the police, five armed persons entered the premises and the fire opened to the customers. She suspects that it is about reckoning in the criminal circuit.

In Antioquia, the National Liberation Army (ELN) is fighting with the Gulf Clan drug gang over control in the area. In the city of Caceres, hundreds of people were driven away from home by the gang war last weekend.

The ELN rebels are dissident FARC members who refused to lay down arms after the peace agreement. They were in contact with the government in Quito, but the talks were recently stopped because the group immediately started to attack again after a cease-fire. In addition to drug trafficking, like Gulf Clan they also deal with illegal gold mining, extortion and other criminal activities.