Home / World / Sessions will testify to Senate on Tuesday 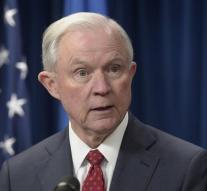 washington - Jeff Sessions, the US Secretary of Justice, will testify on Tuesday for the US Senate Intelligence Commission. He wants to respond to allegations of former FBI director James Comey, who testified on Thursday.

That writes Sessions in a letter held by Reuters Press Office. According to Sessions, the intelligence committee is the 'most suitable place' to respond to Comey because the committee has access to relevant secret information. '

It is unclear whether the testimony is behind closed doors or is public.

Comey spoke of his public testimony about Russian interference with the campaign of President Donald Trump. Comey does not doubt Russia has interfered with the US presidential election