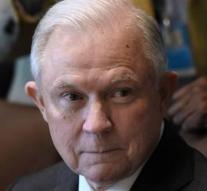 washington - US Secretary of State Jeff Sessions (Justice) will testify in a public session on Tuesday for the Senate Intelligence Commission. The governor is expected to be in touch with his contacts with Russian officials during the election campaign of President Donald Trump.

Sessions asked for a public session by a spokesman for his department himself. The minister would prefer not to leave his story behind closed doors. 'He believes it is important for the American people to hear the truth from his mouth,' said the spokeswoman.

The minister came to lie under fire earlier this year. The Washington Post revealed in March that Sessions during the Trump campaign conducted talks with Russian ambassador Sergey Kisljak. Sessions would have swept over the committee that judged its nomination as minister.