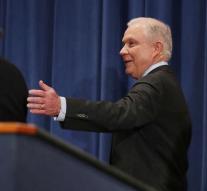 washington - The US Secretary of State, Jeff Sessions, has indeed discussed matters surrounding Donald Trump's campaign with Sergei Kisljak, the Russian ambassador to the United States. US intelligence services have received talks from the Russian ambassador in which he says that against his superiors in Moscow.

That claims a former and current US official against the Washington Post that released the news on Friday. According to Kisljak, he and Sessions discussed policy matters that are important to Moscow, would appear from the surveys.

The talks between both took place in the run-up to the November 2016 elections. The current Minister of Justice was currently an important advisor to Trump. That there have been contacts between Kisljak and Sessions was already known. Sessions always claimed, however, that the campaign was never discussed.