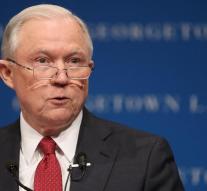 washington - The US Secretary of State Jeff Sessions has annoyed the behavior of several players in the National Football League (NFL). They protested against racism by kneeling or joining the arms while playing the national anthem before the start of the match. Sessions said that although their right to free speech is guaranteed, they should be convicted of the lack of respect for the country of origin shown.

Sessions held a speech at a legal faculty in Georgetown on Tuesday. He said athletes who choose to demonstrate while the national hymn is being heard is making a 'big mistake' with an action that undermines 'the commitment we have with this nation. '

President Donald Trump called on the NFL to suspend the conscious players. Criminal prosecution is not in place. 'But by provoking such a provocative act, they can expect a disapproving reaction. The president has the right to condemn them and I would do that too, 'said Sessions.