Home / Tech / Services VTech possibly even weeks off the air 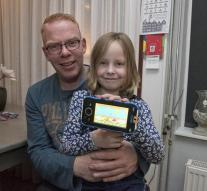 - Children who have received a VTech Nicholas gadget should still have to wait until they can use. The toy manufacturer after the recent hack stop put all online services and, according to a top executive may take weeks before everything is put back into operation.

" Naturally, having a financial impact on us if we do not service online before Christmas, but our top priority is securing the data ", says Allan Wong, CEO of VTech, The Wall Street Journal.When the hack November 24 came to light, data from more than 4.8 million adults and 6.4 million children stolen. In the Netherlands, data from a hundred thousand more than 120 parents and 000 children stolen.The identity of the hacker compromised VTech still in the dark. Also, according to Wong, the exact extent of the hacking is not yet known. " We know that there are certain safety aspects that we can improve our system ", said Wong.According to security experts, the VTech database was poorly protected and there were security holes in for instance the encryption passwords which could be easily made visible for example in this case via a so-called SQL injection attack. Data such as names, birth dates and gender were not encrypted.Last week, VTech announced that it has hired security company Mandiant to investigate the hack and secure its systems. Mandiant which was acquired in 2013 by fellow FireEye will also look at how VTech handles customer information and how their security can be strengthened.Wong, who has a 3-year-old grandson, says understanding for parents who are concerned that sensitive information about their children is leaked. According to him, it is not realistic to ban children from internet. The industry must be, according to him for ensuring that toys and games online just as safe as physical specimens.Commercial director Joran Badgers VTech Benelux called it earlier additional acid that get offline services as happened just before Christmas. By discontinuing services as Kid Connect allows owners of a DigiGo not send messages, also the registration of products and doanloaden new apps is not possible. Victims can report to the customer service of VTech.
NEW