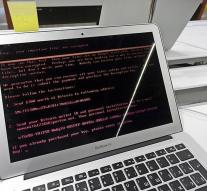 kiev - The Ukrainian police seized the servers of the company suspected of spreading the so-called Petya ransomware on Tuesday. This was done in connection with the investigation into the major cyber attack, which among other things struck organizations in the Netherlands.

The head of cybercrime in Eastern European country, Serhiy Demedyuk, confirmed that it was about M. E. Doc's servers. That company supplies accounting software to around 80 percent of Ukrainian companies. The owners of the company have not responded to the seizure of their hardware.

Researchers at the Slovakian cyber security company ESET said Tuesday had found a 'back door' in three software updates by M. E. Doc. This allows hackers to get unprecedented penetration into user systems.