Home / World / Serious violation of human rights in the Crimea 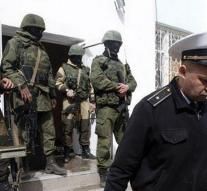 geneva - Russia commits 'severe' human rights abuses in the Crimea, including imposing Russian citizenship and deporting hundreds of detainees to prisons in Russia. This conclusion is contained in a United Nations Human Rights Report (UN).

The report further describes alleged violations as 'arbitrary arrests, torture and at least one extrajudicial execution' since the Russians annexed the 2014 peninsula in Ukraine. The annexation led to international outrage and sanctions against Moscow.

UN Human Rights Commissioner Zeid Ra'ad al-Hussein said the imposition of Russian citizenship equals the compelling of people to 'marry the forces they regard as hostile. '

The report calls on Russia to effectively investigate alleged torture, abduction and killing of the Crimea. '