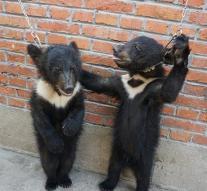 The investigator of the organization in Asia went down ten places where animals are trained for circuses in Suzhou, a city on China's east coast which alone has more than 300 circuses. He did record his findings in this report with accompanying petition.

The methods for the animals to learn all sorts of unnatural tricks, according to the report and its (very violent) images very inhumane. Shows how young black bears with a chain hoisted on their necks up, so they are forced to walk on their hind legs. The bears must sustain this for hours, otherwise they can hurt themselves or even suffocate. If they do not cooperate, they are roughly yanked their collar and dragged along the ground.


The video also shows how lions and tigers being mistreated while learning a trick on a ball. 'Coaches struck, strike and threatened them with long, heavy metal sticks, some with a whip at the end. When they were not forced to act the big cats were confined in barren cages with little room for movement, 'says PETA via a press release.

Monkeys, dogs and other animals are also very badly, says the researcher. After the 'training' the animals are 'appalling conditions' locked in small, barren cages. 'An old dog, Laifu called by the investigator and too old to act, was forced open 24 hours a day to live in this cage without ever being left out,' illustrates PETA.