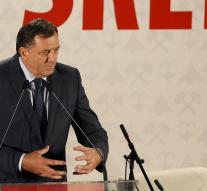 sarajevo - President Milorad Dodik of the Autonomous Republic of Srpska in Bosnia and Herzegovina announced in March to hold a referendum on undoing recognition of the Constitutional Court. The United States and European countries fear that thereby separating the area is a step closer.

Dodik of the Republika Srpska, in the north and east of the country, responded Sunday to a decision of the Bosnian Constitutional Court last week.

That court stated that the republic its national holiday on January 9 to move to 25th November. The Serbs celebrate in January that Srpska was founded, while Bosniaks and Croats in other parts of Bosnia- Herzegovina in November celebrating the country gained independence from Yugoslavia in 1943.

Dodik responded piqued the ruling. " We put this decision not to. The judge can forget ", he said. This seems again to get tensions in the Balkan country. After the disintegration of Yugoslavia is facing the region with ethnic tensions that sometimes result in violence.