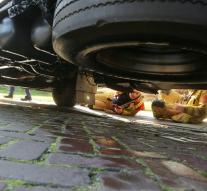 - A Russian truck driver probably caused a 150 kilometer long rail diesel on the road. He rode in the night from Tuesday to Wednesday with a leaking tank of the German Munich to the Austrian town of Bergheim near Salzburg. The Austrian police found out he only notices that he leaked diesel fuel.

The Serb had refueled in Munich around 1000 liters of diesel. Bergheim was only 20 liters over there. The driver still remembered that he was driving on the bypass of Munich on a piece of tin. The fire removes the track.