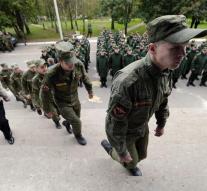 belgrade - Serbia, although the country still refer to the European Union, a military exercise with Russians and Belarusians defended its territory. The 'tactical military maneuver 'begins Thursday and lasts over a week. 'We partner with whom we want,' said Foreign Minister Ivica Dacic in Belgrade Tuesday.

Serbia's Dacic claimed no intention to ask anybody permission because 'it is our country and our interests. 'The exercises 450 soldiers of the national army with two hundred sixty Russians and Belarusians. The EU has to respect the candidate regularly sanctions against Russia prompted because of the annexation of the Crimea, but that has so far always rejected with reference to the Serbian neutrality and historical relations with Moscow.