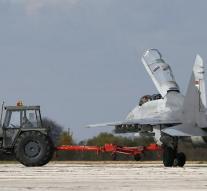 Serbian air force already has four revised copies of this model. The country is also engaged in the purchase of an air defense system.

Vucic brought the aircraft order in Russia indirectly in connection with the purchase of helicopters by its neighbor Croatia. NATO member state did for aircraft worth 220 million dollars but pay 30 million, he claimed. The purchase price of the MiGs below the market value, but not as much as for the helicopters to Croatia, said Vucic. An amount he did not however mentioned.