Home / World / Seoul wants to mediate between N Korea and US 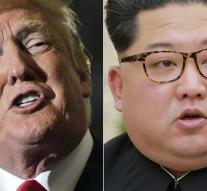 seoul - South Korea wants to act more actively between North Korea and the United States. This should ensure that the planned summit meeting between the leaders of the two countries can be 'successful and based on mutual respect', the Korea Times newspaper quoted from a government statement.

North Korea threatened to cancel the meeting between Donald Trump and Kim Jong-un. A source around the government said that the South Korean president Moon Jae-in will play a more active role as intermediary between the countries. That should bring Washington and Pyongyang 'closer together' and thus make an agreement possible.

The historic meeting with Trump and Kim will take place on June 12 in Singapore. It will be the first time that sitting leaders of the two countries are sitting around the table together. The US wants North Korea to put an end to its nuclear program.