Home / World / Seoul does not have to pay to THAAD 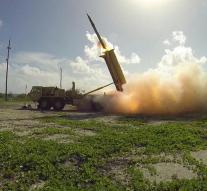 seoul - The National Security Advisor of President Donald Trump has assured South Korea that the country does not have to pay on the THAAD anti-missile system. That made the South Korean authorities known Sunday, reports Yonhap press office.

Security advisor Herbert McMaster left his South Korean colleague by telephone knowing that the previously made agreements were maintained. This means that South Korea only supplies the country for the placement of the anti-missile system.

The words of McMaster are to great relief from Seoul. Trump said earlier this week that South Korea has to pay for the one billion dollar project. THAAD is currently being built as a defense against possible attacks from North Korea.