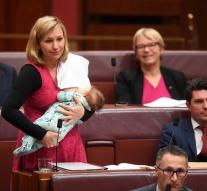 canberra - An Australian senator who wrote history of giving birth to breastfeeding in parliament has resigned after finding out that she has dual nationality.

Larissa Waters of the Green Party was born in Canada. But according to the Australian constitution, someone can not fulfill a political position at federal level if it has dual nationality, the BBC reported Tuesday.

Last Friday, another Greens senator, Scott Ludlam, also retired because of the possession of dual nationality. Both politicians were deputy party leader.

In May, Waters attracted international attention as the first politician to give her child breastfeeding in the federal parliament of Australia. Waters said she only discovered her dual status after Mr Ludlam's case, who recently found out that he had the New Zealand nationality.