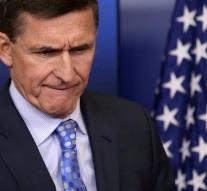 washington - The US Senate Research Commission wants to sue two companies of former security adviser Michael Flynn. Previously, Flynn himself was challenged with the request to transfer relevant documents about the investigation into Russian interference with the US elections. Flynn refused that and called on the Fifth Amendment to the Constitution, which stipulates that no one has to bear witness to himself.

'We do not agree with Flynns advocates' interpretation of the Fifth Amendment. But a company can not rely on this, 'said Mark Warner, the Democratic Vice-President of the Research Commission.

Flynn was not employed as a national security advisor for the White House for a month yet. In February, he had to resign because he had conceded that he had talked with the Russian ambassador about a relief from sanctions against Russia when he was not yet in office. He is one of the most important witnesses in the investigation of cooperation between the Kremlin and Trumps campaign teams.