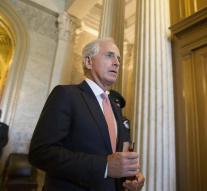 washington - Policy makers in the United States have reached an agreement on Wednesday (local time) to pave the way for new sanctions against Russia.

The US Senate will approve the bill later this week, despite the opposition of President Trump's government, the Senate Chairman of the Committee on Foreign Affairs said.

The US Congress voted on Tuesday with an overwhelming majority for the new sanctions package against Russia because of its interference in the US presidential and military role in Ukraine and Syria. The expectation is that the Senate will approve the proposal by a similar majority.