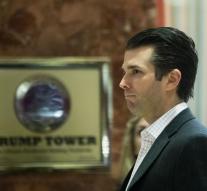 washington - The US Senate Justice Committee wants to hear President Trump's oldest son. Among other things, the commission investigates the allegations that Russia wanted to influence the American elections last year in favor of Republican Trump. Commission president and senator Chuck Grassley said on Thursday that he would call the 39-year-old Donald Trump junior.

Early this week, it became known that the young Donald Trump spoke in the election year with a Russin who seemed to be looking forward to his information about Democratic presidential candidate Hillary Clinton. His interlocutor would be sent to Washington by the Kremlin.

But, according to Trump, Russian advocate Natalia Veselnitskaja did not make the promise true and the conversation did not matter anymore. Veselnitskaja has said to American media that she has never worked for the Russian government. She said she met Trump jr for a private conversation that had nothing to do with the fact that he was the son of a presidential candidate.