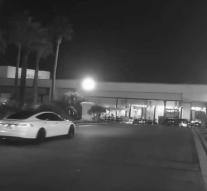 las vegas - An accident from the future in Las Vegas. A self-propelled Tesla has been bumped into an independent robot. The robot did not 'survive' the blow.

The accident happened during the preparations for the CES, the largest tech fair in the world. Employees of the company Promobot brought their robots to the conference room. The robots drove in a row in succession, but one of them left the queue and ended up in a parking lot. There the robot was hit by the Tesla. The robot falls on the street and a bystander 'takes care' immediately, can be seen on video images that Promobot distributed. The car drove another 50 meters.