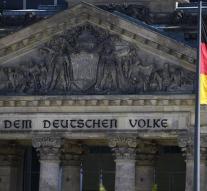 berlin - The German voting threshold requires a party to get at least 5 percent of the votes to be eligible for parliamentary seats. This should prevent the public representation from being fragmented by a lot of parties who are unable to work together.

It is expected that only six parties will succeed in meeting Sunday in the Bundestag. That's a great deal for German concepts, and even seven as the Bavarian Christian Democrats (CSU) are counted separately.

But despite the threshold, 42 parties are taking part in parliamentary elections. For example, there is the Magdeburg Garden Party hoping to be a totally new 'dark green flow in politics'. Purpose is an ecological, more social and prosperous world, according to the website.

The party was founded in 2013 by 'Wutbürger' (evil citizens) when the municipality of Maagdenburg threatened to sacrifice 162 allotments for a construction project. Point one of the party programs therefore states that gardens and allotments must be protected and never 'become victim of third party interests. 'The Dark Greens emphasize that they are there for everyone and not just for Maagdenburgers or Germans who are gardening.

Numerous parties pursue specific purposes, such as Die V-Partei, for vegetarians and vegans. The V-Partei wants to remove all meat from the supermarket and very low taxes on organic food. Those violets want more spirituality. To that end, there must be a basic income for all. When the material concerns about existence are lost, everyone can take care of spirituality.

Another party, Die Urbane, was founded in Berlin around hip hop in May and wants to bring 'values ​​and experiences from subculture into the country's political structures. 'The satirical Die Partei is older and already a big success on the internet. Internets know the party's website better than those of Angela Merkels CDU or the protest party Alternative für Deutschland. Partier strives for the legalization of drunk driving and medical delivery of cocaine.