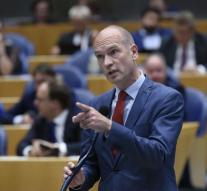 He said Saturday in an interview with Dutch newspaper. ' He swipes with Christian card, with one goal: gather as many votes. That is left, saying to him: for 'completed life' you have to vote no D66. And it can for him right if he wants to clearly see that you would not need a Christian party to have something of Christian inspiration in politics, 'says Segers. ' I am under no illusions about the real agenda of the VVD, when it comes to fundamental Christian values. '

According to Segers will only take into account the wishes of his party as long as needed to form a majority.

The Christian Union holds a party congress Saturday in Nijkerk.