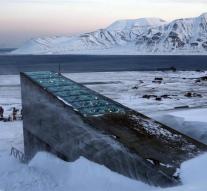 amsterdam - Humanity needs to do much earlier than thought relying on " the doomsday " preserved flower and plant seeds. Cause: the war in Syria .

In the deep- frozen soil of the archipelago Svalbard, in the Arctic, the seeds are stored by virtually every known crop. This " flora - Noah's Ark " an appeal can be made to natural disasters such as a hurricane or flood brings a certain species on the brink of extinction.

Now a genetic laboratory in Aleppo was destroyed by bombs and no prospect for peace in Syria, being transferred buried seeds in Svalbard to Lebanon and Morocco.

There may be important biological research be continued.