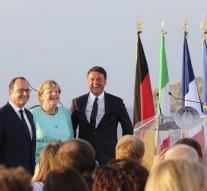 rome - Europe must work together better to defend themselves against Muslim extremists. The various internal security should exchange more information.,, Because of the war in Syria and the growth of terrorism, we must do more in the field of internal and external security. The European Union is facing an enormous challenge. '

That said Chancellor Angela Merkel after a mini-summit with French President Francois Hollande and Italian Prime Minister Matteo Renzi on board the Italian aircraft carrier Garibaldi.

The three countries not only talked about the threat of terrorism but also the effects of the brexit and crises in various parts of the world. Hollande spoke after the summit hard on the situation in the Syrian Aleppo.,, The international community should be ashamed if they do nothing to combat the humanitarian crisis. '' In Aleppo is heavy fighting, the conflict has intensified since Russian and Syrian planes have increased the number of attacks on Syrian rebels. According to the World Food Programme, part of the United Nations, threatening a severe shortage of basic goods.


The mini-summit is part of a diplomatic tour of Merkel. She travels to Estonia, the Czech Republic, Slovakia and Hungary for talks with the leaders of those countries. Friday she speaks with Prime Minister Mark Rutte. He and the Prime Ministers of Sweden, Finland and Denmark invited for consultations on Friday evening at Meseberg Castle in the German state of Brandenburg.