Home / World / Security service failed in the run in Manchester 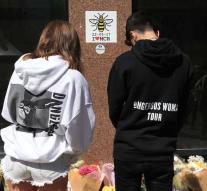 london - In the run-up to the terrorist attack last year, the British internal intelligence service MI5 'dropped' in Manchester. 'As a result,' possibilities for preventing the attack have been lost. '

That is the conclusion of a British parliamentary investigation into the occurrence of MI5 and the police prior to the suicide attack at a concert by the American singer Ariana Grande. At the Manchester Arena in the English city, 22 people were killed and 120 injured, including many children, in May last year.