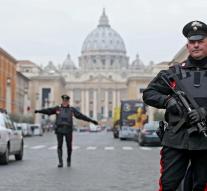 rome - The security in the Italian capital Rome has in recent days stepped up considerably. Following the attacks in Paris on Friday, the government deployed some seven hundred extra soldiers. They monitor among other entrances and exits of subway stations and ensure tighter controls on visitors to the Vatican.

The threat level in Italy has increased to two. That is the highest level without the existence of a direct attack on the country. Rome is considered by the Italian Government as the most likely place for an attack, due to the presence of the Vatican.