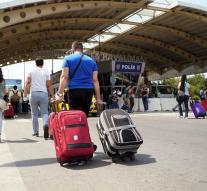 ankara - The Turkish authorities suspect that at or near the second airport of Istanbul, on the Asian side of the city, still conspirators hiding. Guards Sunday at Sabiha Gokcen Airport, named after the first female fighter pilot, fired warning shots. The suspected coup plotters fired back.

According to a government spokesman, there are arrests. There are also clashes reported at an air base in Konya, central Turkey.,, The situation is under control. ''