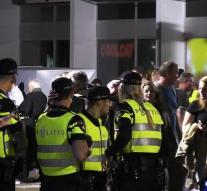 assen - Three security guards during the traditional TT night the victim of abuse, the police said Saturday. In and around Assen eight people arrested for assault, theft, vandalism and insulting police officers.

Nevertheless, the police speak of an atmospheric expired TT night without major incidents. There were an estimated 60 000 people attended the festivities in the center of Assen.


On a campsite Laaghalerveen in Assen was a 36-year-old man from Zwolle severe burns on his legs. The man tried to extinguish a fire hit in aggregate.