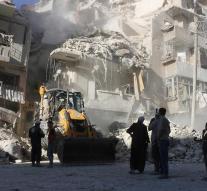 - The UN Security Council holds emergency meeting on Sunday the fighting in Aleppo, which since the end of the truce between rebels and government forces to 180 people certainly cost lives. The seat is at the request of the United States, Britain and France.

Saturday was the third consecutive day that air strikes were carried out in Aleppo. Only Saturday there were already 50 deaths. There are too few doctors on the scene to treat the wounded. The rebels and government forces on the ground fighting each other on the outskirts of the Syrian city.