Home / World / Security Arena stadium as leaky as a sieve 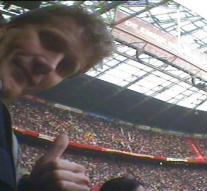 amsterdam - The security of the Arena stadium in Amsterdam shows as leaky as a sieve . By giving out as a famous footballer , it is possible to order VIP tickets for free via email and even get access to the players home .

Undercover journalist Alberto Stegeman managed to be both at the game Ajax-PSV as Orange against the Czech Republic on the best places to sit. In one game, he had the name of former professional footballer Daniel da Cruz Carvalho cards received by email and on the other encounter he used the name Mario Melchiot. " There is no control place and all the doors were open to us. We even got parking there and no one explained to us any obstacle in the way. All we had to do was create an email account in the name of one of the players and everything went by itself, "said Alberto Stegeman which displays the images in his Sunday program Undercover in the Netherlands.

The investigative journalist was tipped off by a man who was already a year in this way to every major football in our country. " He was surprised at the fact that it was all so easy. Now he is going to stop, " said Stegeman, who are still on and response of the Arena and the KNVB wait.