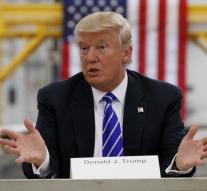 - The Secret Service, the US department responsible for the security of the president, has held several meetings with Donald Trump about his campaign remarks that seem to allude to the shooting of Hillary Clinton.

According to the campaign Trump did not advocate violence, says a member of the Secret Service told CNN.

Trump made the controversial comments Tuesday during a meeting in North Carolina. 'Hillary wants to abolish the Second Amendment. If they should choose its judges, there's nothing you can do about it, ' he said. ' Although, the people of the Second Amendment, maybe there is something. I do not know. ' In the second amendment of the US Constitution enshrines the right to possess firearms.

Trump himself said later that he only wanted to gun owners vote against Clinton. 'This is a strong political movement,' he told Fox News. 'And there can be no other interpretation. I mean, give me a break. '