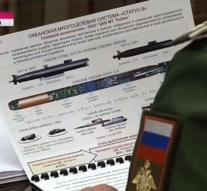 moscow - Two Russian television channels of the state have accidentally broadcasted images of secret documents on a new torpedo system for submarines. That happened when they aired images of President Vladimir Putin visited soldiers in Sochi, according to German media reports Thursday.

It was about a system in development for missiles with nuclear warheads. The text of the documents came clearly into view and was legible. It showed that one area would be very strong on impact become contaminated with radioactivity and therefore would be unusable for a long time for " military, economic or scientific purposes ".

Broadcasters took images quickly from the screen but on the Internet circulated shortly after all images. The Kremlin later acknowledged that the images were broadcast.