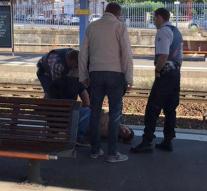 - The French judiciary has arrested a second suspect in the foiled attack on Thalys in August. The man from Tunisia, was arrested Monday, RTL France announced Wednesday. It is not yet known where that happened.

Three Americans who traveled by train from Amsterdam to Paris, overpowered in August Ayoub el- Khazzani, for those with a loaded Kalashnikov fire in the train could open. The man was arrested and is still being held. He still denies having had terrorist intentions.