Home / World / Second night is quiet protests in US 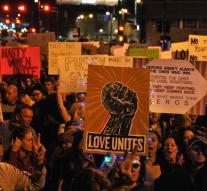 - For the second consecutive night, people in the US took to the streets to demonstrate against the election results. The demonstrations took place in the night from Thursday to Friday is generally quiet and peaceful.

In include Washington, Baltimore, Philadelphia, New York, Los Angeles, San Francisco, Oakland and Portland small numbers of people took to the streets. The largest protest march was run in Denver, where there were about 3,000 people on the leg. In many other places it went to a few hundred demonstrators.

In addition to a number of arrests in Baltimore led the demonstrators in Portland for most of the noise. Since it came into collision with the police had thrown those objects. Also, cars were sprayed with graffiti and smashed shop windows.

A day earlier there were several protests. In several places people came together while they shouted slogans like 'No Trump! No KKK! No racist USA. '