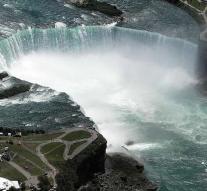 niagara falls - The man who first survived a jump from the Niagara Falls died without a second attempt. This time he tried the stunt in a huge inflatable plastic ball.

Weeks after the jump, the body of 53-year-old Kirk Jones was found 19 kilometers away from the falls. The ball was previously retrieved empty.

As he dared to jump in 2003, Jones walked only a few scratches and bruises. Afterwards he said he would never do anything like that again. Although his family reported that it was a stunt, he later admitted that it was a suicide attempt.

Since Jones's first leap in 2003, another three people survived the fall without additional measures. The world-renowned waterfalls are a favorite spot for vagabonds to extract stunts. People were already in wooden tanks, jet skis and parachutes over the edge. Not long everyone survived the jump.