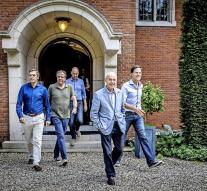 hilversum - Friday, the negotiators of VVD, CDA, D66 and ChristenUnie talk about a new cabinet on De Zwaluwenberg estate in Hilversum. It's going the right way, CDA leader Sybrand Buma said Thursday after the first day negotiating on the estate.

But after two days Hilversum there is no government agreement, says Buma. Nevertheless, progress is being made in the negotiations. Also very complicated subjects are being concluded, said Christian-Unie Gert-Jan Segers on Thursday. According to him, 'he is courageous. '

Since June, the four parties talk about the formation of a cabinet. This usually happens in the City Hall Chamber in the Lower House. They also regularly move to Johan de Witthuis. On Monday they will continue to negotiate in The Hague.

Around the stately building where the negotiators talk is a nice estate with a fence around it. This allows the negotiators to go out quietly occasionally. When they meet in The Hague, they run immediately against waiting journalists and daycareers.