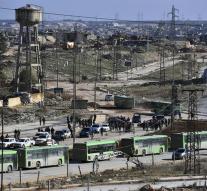 beirut - A second convoy of buses with refugees on Thursday at the end of the afternoon left the besieged eastern Aleppo. Reported that the Syrian state.

The convoy consisted of fifteen buses. How many people and who were not known in the buses. Thursday was a major evacuation of thousands of civilians and rebels in Aleppo underway which eventually will take two to three days.