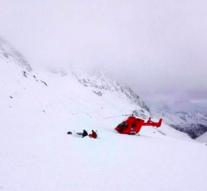 - The avalanche tragedy in the Austrian village of Obergurgl (Tyrol), where Saturday a Dutch citizen was killed, has claimed a second victim. It is a Briton, police reports in the Austrian Sölden.

Two skiers are still seriously injured in hospital. They would be out of danger.

The victims were among a group of ten skiers were surprised by the loose mass of snow at 3000 meters altitude. Some were unharmed and were able to alert the rescue service. According mountain guide Reinhard Scheiber, who was not present at the accident involved a group of experienced skiers.

Connoisseurs of the ski area where yesterday a Dutch skier was killed in an avalanche warning for the conditions in the mountains.