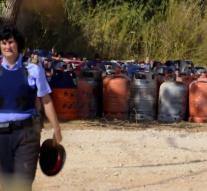 alcanar - The Catalan police have been in the house in Alcanar on Friday, where bombs were probably made for attacks, found the substance of a second person. The building was destroyed by a huge explosion on Wednesday.

A resident was found dead, another ended injured in the hospital. The police, according to the newspaper El País, were using a robot to search for potentially lost explosives on Friday, as they encountered a heavily damaged body.

It is suspected that the three were part of the terrorist group responsible for the many victims in Barcelona and Cambrils.