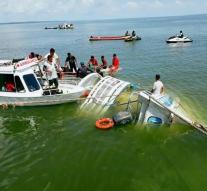 salvador - A Brazilian boat captured Thursday eighteen passengers drowned. According to the G1 news portal, 89 other detainees could be taken out of the water of All Saints Bay in good time. The ship was from Mar Grande on the way to Salvador da Bahia.

It was the second shipwreck in almost 24 hours in northern Brazil. Earlier, a boat that was actually intended for freight transport on the Xingu River sank, causing a total of 21 people. Thursday, 25 more were missing. According to survivors, the disaster was surprised by severe thunderstorms.