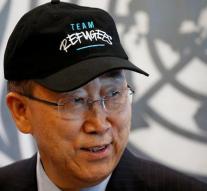 - The UN Security Council holds Friday's second round of voting on the succession of the Secretary-General's country organization, Ban Ki-moon. notify the members of the board of each of the twelve candidates or they 'encourage' his candidacy, 'discourage' or no opinion about hebben.Aan the amount of aid they receive can read candidates then or continuing their campaign still make sense has.

Ultimately, the United Nations General Assembly must approve the new Secretary General, but that happens on the recommendation of the Security Council. In it, the five permanent members (Britain, France, Russia, China and the United States) veto.

Six men and six women have reported for the most important diplomatic function in the world. Eight of them come from Eastern Europe, two from Latin America, one from Western Europe and one from New Zealand.