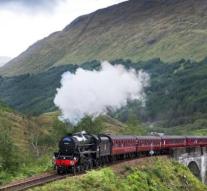 glasgow - A four-child family-run family in the Scottish Highlands was saved by the Zweinstein Express, the train used in Harry Potter movies.

Jon and Helen Cluett stayed with their four children between 6 and 12 years old in a remote bothy, a simple mountain hut at Loch Eilt. The accommodation can only be reached by a long walk or by a canoe over the lake. The family chose the canoe.

The next morning it was more outside its banks and the canoe was dragged through the rising water. The family saw a walk over almost 5 kilometers of difficult terrain and decided to call the police. That allowed the stranger to stop a train on a nearby track.

To the great surprise of the family and especially the joy of the children, it proved to be the famous Zweinstein Express. The train is truly 'The Jacobite' and drives to tourists across the rough West Highland Line, which appears more often in the magic movie series.

'I'm a little sad that I lost my canoe, but when the children saw the steam train, all the disappointment of the faces disappeared,' Father Cluett recalls. The family was then deposited at the next station, where they got a lift to their car.