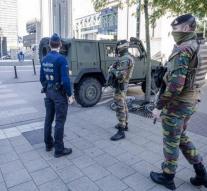 brussels - Special units of the Belgian police have done in Brussels on Wednesday morning raids as part of a terrorism investigation. According to eyewitnesses, there are at least eight raids done include the towns Molenbeek, Schaerbeek, Anderlecht and Laken, reports the newspaper La Dernière Heure.

A number of people taken in for questioning, including those who have returned from Syria.